The Five Nicest Neighborhoods in Brooklyn to Call Home 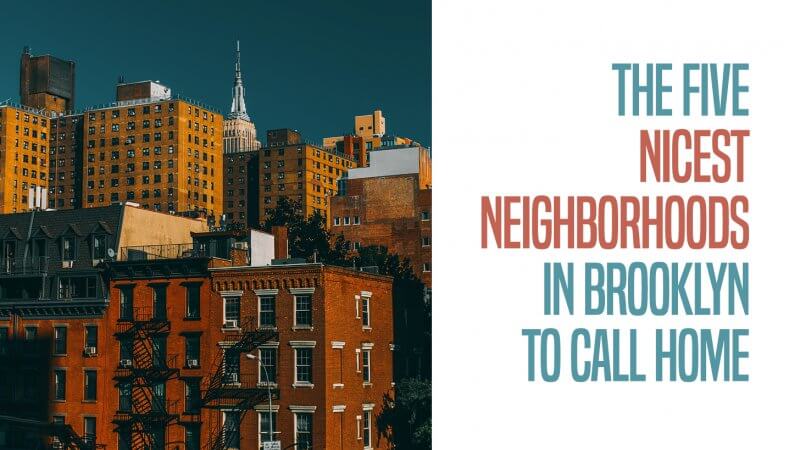 Brooklyn is quickly becoming the hippest enclave in New York. As the cache of Manhattan has risen, so has the cost of living, and Brooklyn is the new spot to live if you want to be in the heart of it all, without the price tag. The reputation of Brooklyn as becoming something of a hipster mecca is well-earned, but that doesn’t mean it’s homogeneous. This borough is home to dozens of distinct neighborhoods, each with their own unique identity. Here are some of the best options if you’re moving to Brooklyn:

While much of Brooklyn has changed significantly in the past few decades, Park Slope has remained stalwartly sedate and friendly. There’s a strong sense of community in this stately neighborhood, and the move of the younger generations to neighborhoods like Bushwick mean that it remains one of the more affordable options around. It’s particularly known as being an enclave for the LGBQT community, and it serves as a home to a number of younger families.

Once one of the richest neighborhoods in Brooklyn, with millionaires on what seemed like every block, Clifton Hill has grown significantly more affordable since the late 19th century. Today, it’s known for its vibrant art community, a community that’s bolstered by the presence of the Pratt Institute. It’s also conveniently located near the trendy and rising Wallabout neighborhood, giving Clifton Hill residents the opportunity to explore some of the hottest new restaurants, clubs, and shopping while still being able to enjoy the relatively sedate ambiance Clifton Hill has to offer.

“Down Under the Manhattan Bridge Overpass” has come a long way in the past few years. The desolate stretch of industrial decay has been revitalized as a tech industry hub, and that’s brought a surge of culture and life to the cobblestone-lined district. The community is rich here, with attractions ranging from the kid-friendly Jane’s Carousel and the busy Brooklyn Flea Market. While Wallabout is seen by many as the “next Dumbo,” it’s unlikely this lively neighborhood will be losing its popular appeal anytime soon.

If you’re someone who likes to plunge headfirst into local art and culture, Crown Heights is the place to be. While Park Slope may be the place to beat when it comes to young and fresh new artists, Crown Heights is ideally located near a number of the borough’s most prominent landmarks. Central access to a number of major train lines and close proximity to both the Brooklyn Museum and Brooklyn Botanical Gardens make it one of the most sensible choices geographically. It’s also the neighborhood to beat when you’re looking for delicious and legitimate Caribbean cuisine.

New York may have a reputation as the City That Never Sleeps, but that doesn’t mean it’s all busy and impersonal. Tiny and stately Cobble Hill has the feel of a small town with its handsome brownstones and friendly neighbors. Court Street serves as the main thoroughfare, and it is home to a wealth of cute, locally owned boutiques as well as larger establishments like Trader Joe’s. This neighborhood also a hub for authentic Middle Eastern dining and culture.